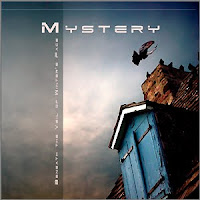 Last night Rick and I went to see Mystery yet again. Mystery is a Montreal-based prog rock band that has been in existence since 1986. The last time we saw them was a little over a month ago when they opened the FMPM prog rock festival.

This time around the venue was a small bar on Papineau street called "La place à coté", and the place was packed. The guys from Mystery, lead by composer Michel St-Père, played most of their latest album (pictured here), with 'Voyage to the Other Side' and 'The Awakening' left unplayed. Three songs from the previous album, Destiny?, were also played... those being "Queen of Vajra Space", "Shadow of the Lake", and the title track. They also played, as is their want, a cover of Pink Floyd's "Hey You".

We were happy to hear tracks from the forthcoming album One Among the Living: the title track with its soaring vocals and superb guitar work, and "Sailing on a Wing" which ended the show on a graceful note.

As usual, the always smiling Michel St-Père is a subdued individual on stage, choosing to let the light shine on lead singer Benoit David, who was in great form last night. But when it comes to his guitar work, Michel St-Père leaves no doubt in one's mind that he is as accomplished as he is inventive. When his time comes to shine on stage, he regals in it. The rhythm section, Steve Gagné on drums and François Fournier on bass, was solid and lead the band with style. Dean Baldwyn, on guitars, wasn't simply a rhythm guitarist, with his solos soaring and precice.

This was the last show for Mystery for a time, since Benoit David is returning as the singer for Yes for their upcoming tour. All in all, this was a fitting last show.

By the way, thanks to all the friends we met at the show. Keep on listening to our prog show on http://www.mohawk-radio.com/ on Sundays (15h00 EST in America).

Frank
Posted by Frank at 5:25 PM No comments:

Bad news first! The FMPM, the Montreal Progressive Rock Music Festival (FMPM is the french acronym) is dead. I'm sorry to see it go. It was, for four years, a great showcase for progressive music from around the world and for homegrown acts. I would like to thank everyone that had a hand in putting this great festival together, starting with Robert Dansereau, whom I met during a Marillion Weekend, and who was and is a big fan and a great guy.

And now the good news.

From the ashes of the FMPM may grow another Prog Rock Festival here in Montreal. Talks are alerady under way, and interest is shown from all quarters. We may yet have a festival where our favourite bands can play the music we have grown to love.

As the saying goes: The king is dead. Long live the king!
Posted by Frank at 7:40 PM No comments:

Sunday the 17th of October 2009. The show started at 15h00 EST. If you liked the music, please buy the albums directly from the artists - simply follow the links.

The show went without a hitch. Show started at 15h00 EST. The set list was as follows:

Hope you enjoyed it!
Posted by Frank at 4:05 PM No comments:

More news soon.
Posted by Frank at 2:14 PM No comments: