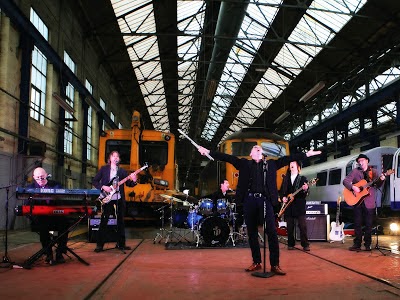 Big Big Train are preparing live gigs!! This is the news a lot of Big Big Train's fans have been waiting for. The band haven't properly played live since its early incarnation, and since 2009 have mainly been considered a studio band, releasing well polished and complex music with no regard if it is playable live or not.

Well 2014 will be the year Big Big Train finally hit the stage and play live. To that end they have recruited some extra musicians to add to their signature sound. Headline news in prog magazines have mostly centered around the fact that Beardfish's Rikard Sjöblom will be joining the band on guitar, keyboard, and vocals. In truth I love Rikard and Beardfish. I saw them live and they are a fantastic band. I also interviewed Rikard years ago when this radio show was in its infancy and met him 2 years ago at a prog festival, and he is a gracious and interesting artist. But the news should not be about him but about Big Big Train, and I am sure that Rikard would agree with this assessment.

Tour dates have not been announced yet, but rehearsals are set to begin in August at Peter Gabriel's Real World Studios in Bath, where they will be recorded for a future DVD or BluRay release. so this gives us an Autumn 2014 timeline for the dates, which incidentally is about the time of Summer's End... Will they play that famous English festival at the end of 2014?