K2 Tour of the East Coast 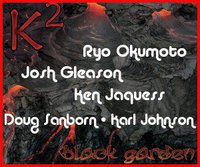 Yes! K2 are presently touring the East Coast of the US. It's a small tour, but it's a start! If you're a regular listener of this radio show, you know how I love this band. Rick never heard of them until I gave him a listen, and he became an instant fan (a little like he did with me and Beardfish). Ken Jaquess, the brains behind K2, is also the voice behind all the Simpsons characters you hear during the show... A very talented person indeed. If you haven't picked up their CDs (2 to date), do so! If you want to learn more about their latest CD go here!

Though I live in Canada, I will be at their show in Brighton, MA. Anybody wanting to meet up will be welcome. Another regular listener, Sónya Kükcinovich Hill, is following the band for the duration of the tour, so you can also meet her, and the band! Tickets are still available. See you at the show!

Tour dates are as follows:

All About The Enid

This week the IPRS offers an interview with the leader of the symphonic prog band The Enid, Robert John Godfrey. In the case of The Enid, "symphonic" is a moniker that truely describes their music. Lush, romantic, with hints of World music (in their latest especially), this band is only one to have successfully fused rock based music with the power, dynamics and scale of symphonic classical music. They released their first album in 1976, and have just released their latest, the wonderful "Journey's End" last year. They are presently on tour, so don't miss this wholly original band when they come to a town near you!

They will be at:
Friday May 13th: The Platform, in Morecambe
Saturday June 11th: The Stables, in Milton Keynes
Thursday June 16th: the Key theatre, in Peterborough
Sunday July 24th: in Victoria Park for the High Voltage Festival, in London
Sunday August 7th: at the Cambridge Rock Festival, in Cambridge
Friday August 19th: at the Crescendo Festival, in Saint-Palias-sur-Mer, in France
Thursday September 15th: at the Farnham Maltings, in Farnham
Saturday October 15th: at the Symphony Hall, in Birmingham with a full orchestra, this will be a "not-to-be-missed" gig!

As always, if you love the music please encourage the artists by purchasing their CDs on their website (link is above). Please leave your comments and suggestions.
Posted by Frank at 1:57 PM 5 comments:

No Radio Show This Week

Since I am busy at the Marillion Weekend here in Montreal, there will be no new radio show this week. But to compensate for that, I have made all IPRS radio shows since January available again for download. If you missed a show, this is your chance to listen to it for the first time. Starting with our January 22nd show spotlighting our Top 20 CDs of 2010, up to the last current radio show spotlighting the Marillion Weekend.

So this is your chance to catch up with what's new in the prog world and discover new and interesting bands. The link is here.

Talk to you next week! Cheers!

PS: If any listeners are going to the Marillion Weekend here in Montreal, I'd love to hear from you, so search me out, I'll be at Brutopia Friday and Saturday afternoon, and at the shows for the duration. I also just learned yesterday that Rick will be at the shows also, so come and say Hi to us!
Posted by Frank at 9:41 AM No comments:

The latest International Prog Rock Show is now available for download. You will hear music by some bands that would have been at NEARfest 2011 if it hadn't been cancelled, and since Marillion Weekend is coming to Montreal next Friday, the show then turns to music by bands that we will hear during this weekend. The radio show airs every Friday on UK70s Prog Rock, and is now available for a limited time as a download.

BTW, tickets are still available for the weekend, so grab them if you can... a great time will be had by all!

As always, if you love the music, encourage the artists by purchasing their CDs!
Posted by Frank at 2:38 PM No comments: