On this year ending (and world ending... if we are to believe the Mayan calender) radio show, originally broadcast on December 21 2012 on UK70s Prog Rock, we go through some World Ending prog songs. And since the end of the world didn't happen during the radio show, we ended with some traditional Proggy Christmas songs.

Don't forget to tell me what are your favourite albums of 2012. Simply write them down in the Comments section. I will compile all I receive and we'll have a count down by the end of January.

As always, if you like the music, purchase the albums or the songs through the artists' websites listed above, or through your favourite reseller. Have a great New Year's Eve Prog Party!

It's that time of year again when we look back on the year that has just passed us by so quickly and ponder the good and the bad.

Of the 1104 new releases to date, many are worthy of being in someone's Top 10 of the year.

So once again I ask you, dear reader and dear listener, what are you;re Top 10 Progressive Rock CDs of the year. I will compile the lists and play the Top 20 on a future International Prog Rock Show.

Please write down your lists in the comments section.
Posted by Frank at 4:03 PM 5 comments:

Merry Christmas to One and All 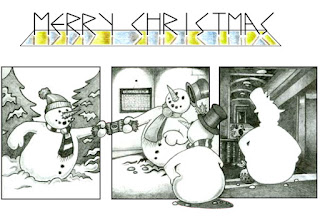 To all IPRS listeners and followers on the Facebook page and here on the blogspot page, I wish a very merry Christmas and a prog-tastic New Year.

Frank
Posted by Frank at 3:54 PM No comments:

The new album by Steven Wilson and band The Raven that Refused to Sing (and other stories) will be released on Kscope on 25th February. The album was written between January and July, and recorded in Los Angeles in September with Steven’s current band line up of Guthrie Govan on lead guitar, Nick Beggs on bass guitar, Marco Minnemann on drums, Adam Holzman on keyboards, and Theo Travis on saxophone / flute. the album was also engineered by legendary producer/engineer Alan Parsons. 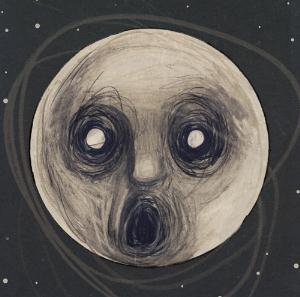 It is now available to pre-order in 4 different formats from Burning Shed. The deluxe edition comes in the form of a 128 page book, illustrated by Hajo Mueller, and features lyrics and ghost stories.

It includes the 6 track 55 minute album on one CD, an exclusive additional CD of demo versions (which themselves are full band studio recordings effectively presenting a full alternate version of the album, with different performances, solos and ideas), a Blu-Ray including high resolution 96K/24bit stereo, 96/24 instrumental versions, a 5.1 surround sound mix also at 96/24, photo galleries and additional artwork, and a studio documentary filmed by Lasse Hoile.

A DVD-V is also included for those without Blu-Ray players, although this does not include the instrumental versions and the 5.1 mix is a DTS compressed version. This limited edition 4 disc deluxe book edition is presently available for a special early bird price.

There are also standalone Blu-Ray, CD/DVD and 2LP Vinyl editions.


More info and links can be found here. 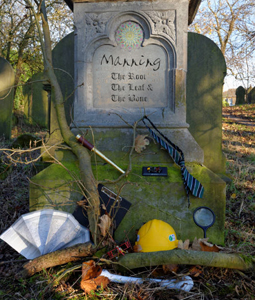 Work has started on the next Manning Studio album (#14) It is to be called The Root, The Leaf & The Bone and is set for Autumn 2013 release… Nine  new tracks have been composed (in no set running order yet):

1. The Root, the Leaf & the Bone
2. Old School
3. The Forge
4. Autumn Song
5. The Huntsman & the Poacher
6. Decon(struction) Blues
7. Mists of Morning Calling to the Day
8. The Palace of Delights
9. Amongst the Sleepers

The recording line-up will comprise of current (and newly revised) Manning band plus some Special Guests (TBA) It is envisaged that the bulk of this new material will be premiered with the 2013 live dates (ahead of the album release) 2013 – The year of the great Manning excavation!

If you want to learn more about Manning, I've had the pleasure of speaking with him on numerous occasions, and you can download the interviews from the Podcast Tab. 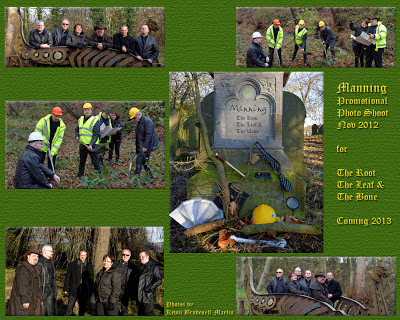 Please see the Manning Website for all the latest details.

On the latest International Prog Rock Show, airing on UK70sProgRock every Friday at 2 PM EST and repeated on Sundays at 7 PM EST, I decided to play some Prog based on classical music motifs, some Orchestra's playing some Prog, and some Porg using Classical orchestras. From the birth of Prog music in the psychedelic era, prog has always had a link to symphonic music. Long tracks, sometimes using the whole side of an LP (for you young ones, LPs are coming back into style), with different themes and movements, are archetypes of what Prog aspired to be. This is a style mostly associated with ELP, Yes, and Rick Wakeman.

As always, if you like the music, encourage the artists and follow the links to purchase their CDs. It's the only way to keep the music alive.
Posted by Frank at 8:10 PM No comments:

Lifesigns' eponomous debut album is scheduled for release on 28th January. It will be a five track offering and early reviews are already calling it stunning!

Listen to the trailer.

Here, to remember him by, is a 1968 live recording of In-a-Gadda-Da-Vida. (And if you want to really creep out on this song, go out and rent the Manhunter DVD. It is based on the novel Red Dragon and features the first appearance of Hannibal Lector. It also features this terrific song). 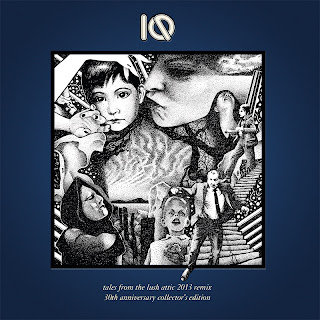 IQ are set to release the 2013 remix of Tales from the Lush Attic on 21st January 2013 in both a double disc CD/DVD format and on vinyl.

Mike Holmes says: “When we did the 25th anniversary edition of The Wake we took the finished stereo mix and re-mastered it. It made a big difference to the overall sound, but we weren’t able to give it a complete remix because the multi track tapes had been lost in the mists of time. However with Tales we could go right back to the beginning, using the original 24 track tapes to build the mix from scratch.


It was great to finally give this album the mix it deserved. I’ve spent years avoiding the studio release of Tales, just because I knew it could be so much better. It is now.”


The 30th anniversary special edition of Tales of the Lush Attic is a double disc with hard back 32 page book with lots of extras, including the complete remix of the album and a DVD featuring live video footage of material from Tales along with a host of MP3 files, original mixes, audio commentary and previously unreleased writing/rehearsal/demo material.


Here is the track listing:

Meanwhile IQ have been writing new material and preparing for upcoming shows. They have had a busy year!

Mike: “2012 was a busy year for us - we've had to rehearse two completely different sets (no mean feat for Tim and Neil) and personally I've spent quite a bit of time on the Tales from the Lush Attic 2013 remix. However, in between all that we did manage to snatch a couple of hours here and there to try out some new material, and I have to say its sounding promising - a bit like IQ in fact. At the moment we've accrued about 30 minutes of stuff, although its far too early to say if we'll actually use any of it or not...

Those of you who have been with us a while will know that time is very, very relative in IQ world, but next year we’ll definitely be concentrating heavily on writing for the first three months, and we'll take a break from writing to play a few live gigs at the end of April. Its always good to test out some of the new material on an unsuspecting public.

I would love to say that we'll have a new album out by the end of next year, but I probably shouldn't put that in writing...”.

We have become accustomed to hearing a classic album in its entirety on Friday nights during Marillion Weekends (Brave in 2002, Afraid of Sunlight in 2003, Marbles in 2005, Seasons End in 2009, and Holidays in Eden in 2011 - the only notable exception being 2007 where they performed parts of Somewhere Else) and themed shows on Saturdays and Sundays. Of course, depending on where the weekends are (Netherlands, Canada, or England) you get to "Swap the band" or an outing, or signing sessions, or simply hobnobbing with fans and band members.

For next year's Marillion Weekend we knew in advance that the Friday night show would be dedicated to the Radiation album. But news has just come out that the band intend to add another classic album to the weekend festivities. On Saturday nights on all Weekends they will perform their classic Brave album in its entirety.


The production will aim to replicate the original tour, featuring all-new projections and our trademark light show.

It's an amazing opportunity to revisit the live performance, or experience the full power of Brave for the very first time.

As of this writing tickets are selling well and some are available for all three weekends, so get them while they last.

You can now pre-order the forthcoming Spock's Beard CD. From their website:

The preorder for our next CD has finally begun!

Proceeds from this preorder are a necessary part of the funding required to put out a quality product, so your support is greatly appreciated!

The title of the CD is “Brief Nocturnes And Dreamless Sleep” and will be shipped as a main disc PLUS a bonus disc. This privately released Limited Edition will contain an additional bonus track and some extra booklet pages that will not be on the InsideOut release in April.

As a gesture of appreciation for your trust in Spock’s Beard, by purchasing this CD before it is even finished your preordered copies will be shipped a month before being released worldwide by InsideOut / Century Media.

You’ll notice that there are more preorder options this time, one of which is a digital download. There are also some more expensive packages offered that are quite unique and may be highly interesting to some of you.

Prog Folk Band The Decemberists on the Simpsons 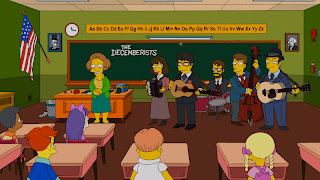 Message from the band itself:

While the live-action Decemberists are still hibernating, their animated counterparts are poised to debut on The Simpsons Sunday night (December 9) at 8pm ET on FOX (and live on into eternity through the power of syndication). Their appearance isn't a mere cameo - the band also wrote and recorded original music for the episode. And Colin penned his line himself which makes it that much more Decemberist-ier.

The episode, entitled "The Day The Earth Stood Cool," also features the great Patton Oswalt, Carrie Brownstein and Fred Armisen. Be sure to tune in via your preferred visual entertainment medium

I have been so busy these past few months I had totally forgotten to post the playlist of the only IPRS radio show of November. So here it is. The show always airs on Fridays and repeats on Sundays on UK70sProgRock.

As always, if you loved the music you heard on the radio show, click on the links above to purchase the CDs directly from the artists.
Posted by Frank at 1:53 PM No comments: